Here’s a short treatment for my script MASQUERADE: To avoid suspicion after his wife's brutal murder, a plastic surgeon transforms an ordinary woman into the exact likeness of the deceased, only to face a horrifying realization in the end.

A damsel in distress being snatched away by a crazed, good-looking scoundrel?

That’s the vibe we get.

Soon, flashing lights on their tail. Sirens. The police. Rachel’s anxiety worsens. But scoundrel ignores them. Italian handmade shoe mashes on the pedal, the Porsche roars away.

Now, lights up ahead. A HOSPITAL. Emergency room entrance. The car whips around a sharp corner, cops close behind, sirens wailing. An ambulance sits with flashing lights, doors open. The scoundrel hops out, unconcerned about the cops pulling up behind him. A DOCTOR appears, intercedes on his behalf: “It’s okay, officers. He’s a doctor…” then ushers the scoundrel inside, Rachel on his heels. The officers stand breathless, confused.

Scoundrel turns out to be plastic surgeon DAMON.

The hospital doc gives him the run-down. Teenage girl, traffic accident, face a pile of goo. Hands him the x-rays. Then he adds, “Here’s a high school photo her mother supplied…”

“Think we can do better than that,” Damon boasts, passing the photo to Rachel.

Hours later… Locker room. Damon exhausted, covered in sweat. Rachel unties his scrubs, pushes them past bare shoulders, towels his glistening back. He turns, grabs her hands, the euphoria of the operation still in his bloodstream. He kisses her passionately.

Rachel resists. “Damon. What about your wife?”

Damon pulls back, cringes at the mention of his wife's name.

Rachel appears in Damon’s office, her eyes full of yearning. “I can’t go on like this.”

Damon confesses: “She knows I won’t divorce her. She’s conditioned me to a certain lifestyle she knows I’ll never give up.”

Rachel says: “I think I have a solution. Come by my place later tonight…”

Damon, pacing, head in his hands.

“The perfect murder,” she corrects him. She patiently goes over the plan: “We find a suitable candidate to take Evelyn’s place. Height, age, general proportions. She agrees to surgery. We make her into the spitting-image of Evelyn, right down to the birthmark on her ass. She acts the part of Evelyn and when no question remains as to who she is, she’ll agree to a public divorce and leave you everything.”

Damon considers, “Why would this… surrogate agree to this?”

“Money. Freedom. A new identity. A fresh start on life. Just leave finding the right woman to me.”

Damon thinks it over… “Murder.” The word lingers on his lips and Rachel’s eyes shine.

He looks into her eyes. She’s very convincing. Suddenly he scoops her up into his arms and kisses her passionately. Looks like he’s made up his mind…

Next comes disposing of the body. They wrap Evelyn in cellophane and haul her to the dock where Damon’s twenty-foot schooner sits anchored. Choppy water at night makes the task arduous, but they manage to weigh her down and dump her overboard. Step two complete.

As the days following Evelyn’s murder wear on, Damon becomes frazzled. People are asking about her. He’s worried the lie about her sudden disappearance is wearing thin. Rachel eases his nerves: “I found her! I found the perfect surrogate!”

She introduces Damon to the woman who will become the new Evelyn: DAISY. Rachel explains how she found the poor woman at a battered woman’s shelter. “She’s the perfect candidate! Perfect height, age, hair color, eye color!”

Damon’s confidence returns. YES! He can do this. He can make this woman into the spitting-image of his dead wife. Elated, he schedules the private surgery…

Hours pass as the doctor painstakingly reconstructs Daisy’s face to match the numerous angles of Evelyn’s profile on the various monitors. Rachel assists, her body tense.

Finally, the surgery is complete. It’ll take weeks before the scars heal and the bandages come off. Damon insists the patient recuperate at his castle. As the days pass, a fondness for the woman grows in Damon’s heart.  You could almost say, an attraction...

The bandages come off. Daisy IS Evelyn, down to every detail! Their plan is a complete success!

Rachel can’t help notice how close the Doctor and Daisy have become.

Damon takes pride in caring for his new wife, who has all of Evelyn’s beauty and none of her flaws.

When Rachel catches the two of them sharing a tender moment, it’s the first realization her plan has a fatal flaw: she didn’t count on her lover’s attraction to the new Evelyn!

When Rachel floats the idea of ‘getting rid of loose ends’, Damon is appalled.

He’s soon confronted by the reality that he’s fallen in love with this perfect version of Evelyn. “It’s not safe for you here,” he tells Daisy. “We’ve got to leave, get away from here. Together…” Daisy agrees and she confesses her love for him. Damon’s heart soars...

Without Rachel’s knowledge, Damon plans their escape. As a sign of good faith, Daisy suggests putting his profitable practice entirely in Rachel’s name, to mitigate her anger. Damon hesitates - its represents a sizable income - but if it means appeasing Rachel, he’ll do it. He makes immediate plans to have his lawyer draw up the paperwork...

But Rachel’s no dummy. With the knowledge that Damon’s away in the city, she drives out to the isolated castle on the cliff. Out to where a defenseless Daisy waits patiently for the good doctor’s return. In Rachel’s hand, a loaded revolver. In her eyes, fierce determination.

Damon, driving those same winding roads, gets a feeling something isn’t right. He tries calling the mansion. No answer. Worried, he spins the car around, mashes the pedal. Hopes he isn’t too late.

He pulls up the circular drive, sees Rachel’s car. Panics. He rushes in, races up the stairs, bursts into Evelyn’s room, sees Rachel with the gun, lunges for her.

A SHOT rings out across the expansive estate.

Back in the bedroom, gun smoke clears.

Rachel stands over Damon’s prostrate body. She turns the gun on Daisy, whose face has turned ghastly white…

And then her fingers drop the gun and Rachel races into Daisy’s arms, and the two of them embrace. THEIR PLAN WORKED!

“The wife says the nurse entered the bedroom just as the good doctor was about to pull the trigger. The two grappled and the gun went off.”

“Looks like she got here just in time…” the partner adds.

As the ambulance with Damon’s body leaves, Rachel and Daisy stand on the front steps, looking on, just two ordinary women having shared an extraordinary, horrific ordeal. But hidden from view, behind their backs, two hands clasped tightly and lovingly together.

x
Posted by Richard Garrison at 1:01 PM No comments:

Reno Gets a Face-Lift! 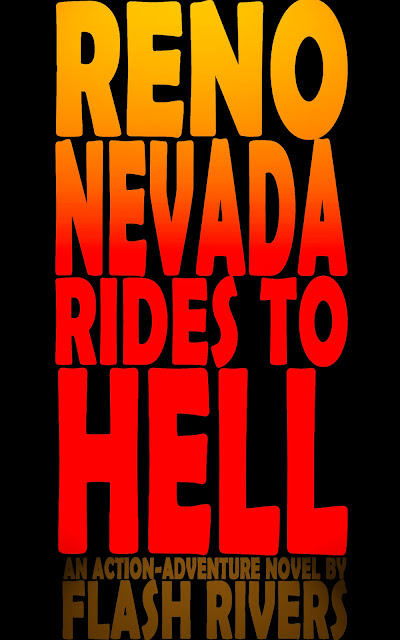 Posted by Richard Garrison at 5:57 AM No comments:

Email ThisBlogThis!Share to TwitterShare to FacebookShare to Pinterest
Richard Garrison
I grew up in Plano, Texas. Entered the US Army when I was seventeen, right out of high school. I worked in a factory for six years building communication shelters for the military. Did a brief stint as a flight attendant for TWA. Worked for a bank a few years.
Newer Posts Older Posts Home
Subscribe to: Posts (Atom)