When I was a junior in high school, I sat on the bus early in the morning next to Melinda, who I always thought of as the intellectual-type. She wore wire-rimmed glasses, had fine strawberry hair, freckles on her cheeks. She was a senior and always spoke to me of lofty ideas, and this particular morning she said something that has stuck with me all these many years. She was talking about exercise and how the mind could get you into better shape than by exercising or lifting weights. At the time, I didn't believe her. It just seemed ridiculous. But now I know, she was speaking a truth. The mind is the only place to start when you want to lose weight, or for that fact, achieve any goal.

Melinda had it right, even if she didn't come right out and say it: your reality is based on the conditioned consciousness of your mind - not the other way around. I say conditioned because it is the way we think that creates the reality around us.

Imagine this scenario: A middle-aged woman wants to lose weight, get in shape. The passage of time, lack of exercise, and poor-eating habits have wrecked havoc on her body. She has high cholesterol, high blood-pressure, is prediabetic. Just by chance, she happens to bump into a mysterious man who claims to be a doctor and he tells her in secret that he is working on a new, cutting-edge technology. He talks her into allowing him to take a sample of her DNA. "I'll be in touch," he tells her before showing her the door.

A few months later, the doctor invites her to his ultra-modern, well-concealed laboratory under the city. There she encounters the Glass Cylinder, dominating the center of the lab. There's something hidden in the cylinder, concealed by a swirling mist. The doctor explains to the woman that over the past several months, he's used her DNA to construct the perfect body. He hits a switch that lights up the cylinder and evaporates the mist and the woman stands there, jaw open, gaping at... her. It's not her but the ideal her. The reconstructed her. The body her eyes are fixated on is Aphrodite and Venus de Milo all rolled into one, but with her face, her bone structure, her skin color. It's her, but her in magnificent, perfect form. The woman can't tear her eyes from herself. Yes, this is just who she wishes to be! It's like a dream come true!

She reaches out instinctively to the cylinder and gasps, "How do I...?" The doctor explains. He's created a process where he can transfer her consciousness into this new body, and then she'd go on living her life, looking awesome, feeling wonderful, from that point forward. She looks at the figure in the glass tube. "Yes!" she proclaims. "I want that body! How soon can we begin?"

And here's where the catch comes in...

The Doctor tells her that if he were to transfer her now, today, it would would be a wasted effort. In only a short time, a matter of months, she would have this new body looking exactly like the body she has today. Why? Because her conditioned consciousness still thinks of herself as being overweight and out of shape. Her thoughts would alter her reality to conform to its truest, deepest beliefs about herself. In no time, the fat would return, the muscles sag and disappear, and all the Doctor's hard work would be for nothing.

"So why tell me all this? Why show me this perfect physical mold and then tell me I can't have it?"

The doctor replies, "I promise you, you can obtain it, if you first condition your mind to receive it." He then gives her these instructions: "Come here, morning, noon, and night and gaze upon yourself. Luxuriate in the wonderful sensation of feeling yourself in this form. Throughout your day, fill your conscious mind with loving images of this perfect body, the perfect you. Condition your mind to accept yourself as this new and wonderful person, and only then will you be able to receive."

You may, by now, know where this story is headed...

The woman did as she was instructed. For several months that is all she focused on, seeing herself having the perfect body. When the time finally came, and the doctor deemed her ready to take possession of her new body, the glass case opened, and like the evaporating mists of early morn, the body disappeared before her very eyes.

"What happened?" she exclaimed.

"Look in the mirror," the doctor replied. "I have fulfilled my promise to you, and now you have the very body you desired, as well as the assurance it will not be wasted." 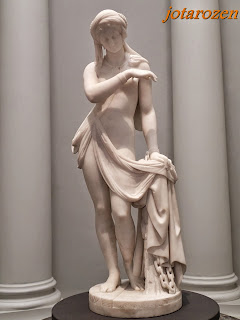 Posted by Richard Garrison at 6:17 AM